When Plokta had to be cancelled last year, one of the most crushing disappointments was missing out on festival highlight Skull Island. Its creator, visual artist and filmmaker Graham Kelly, was due to give a live presentation as part of this series of video essays and lectures. Named after the fictional island of King Kong and its adaptations, Skull Island takes these popular cinematic objects as springboards to explore the changing social and political contexts of moving images and their audiences.

Now, during Plokta TV SE/02, we’re thrilled to be broadcasting the third instalment – streaming primetime at 20:00 CET on Wednesday 24 March here on the site. In anticipation, we talked to Graham about the series, his investigative relationship with moving images, and the hidden revelations waiting behind the silver screen.

How would you describe your role, and your working relationship to video and cinema?

I’m interested in the changing role of moving images in relation to their contexts. Thanks to the Internet and portable devices, moving images are now in direct dialogue with our everyday surroundings – beyond primarily just cinema auditoriums and living rooms. Digital video is in constant negotiation with physical objects, people and landscapes. This creates what I see as a hybridised state, somewhere between image and tangible environment.

I approach this hypothetical state or material as an editor. I look for physical and abstract intersections between seemingly disparate materials – with the aim of creating montages that extend beyond the conventional limits of image sequences.

The Skull Island series has you in more of a lecturing mode. What motivated the format of this series?

This series began as a means of contextualising and elaborating on my other video and installation works.

When shooting footage, I look for connections between elements as I go, with little to no storyboarding beforehand. Take Skull Island Part III, which stems from discovering two artefacts in the special effects archive of the Deutsche Kinemathek museum of film and television in Berlin. Everything in the film comes from just placing them next to each other without initially knowing why. 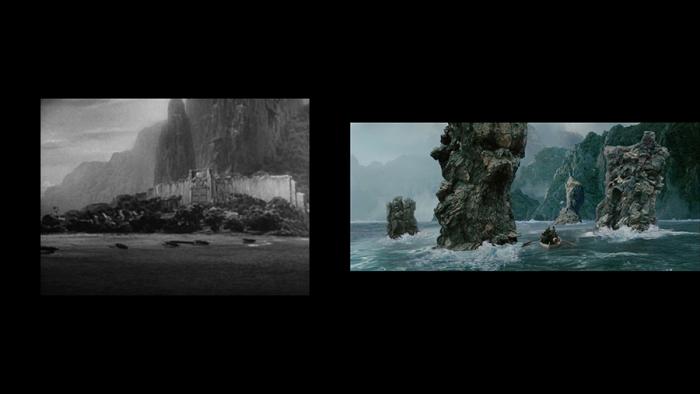 Still from Skull Island I

What is it about images, and cinema, that are so rich in meaning?

I believe that moving images, particularly cinematic images, are a powerful and often veiled source of creating and affirming moral, social, and political norms. They act both as a mirror to, and perhaps partially as an architect of, many aspects of our current perceived reality: systemic sociopolitical dynamics like race, gender, class etc.

When you start isolating scenes or short excerpts from very familiar films, you start to see things that you might normally have missed – often incredibly evocative things. For instance, in the Terminator 2 biker bar fight sequence that I discuss in this work, I noticed that one of the extras in the scene is wearing a t-shirt with the phrase “good guys” printed on it – a hint at the scene’s resonance with a simultaneous, historic event. It’s a very fleeting moment and may not even have been a conscious decision by the director, but it shows how much potentially leading information there is in every frame of a film. The way these elements are interpreted is of course highly subjective, but I also believe there are a lot of universally learned and instinctive ways of interpreting mainstream media.

The current trend of remaking or rebooting cinematic narratives provides a valuable means of reflecting on the social dynamics of the era in which each new version is produced. I don’t think that King Kong in its original form should ever have been reproduced, but each time it’s remade, it’s interesting to see how its problematic narrative is dealt with. The story, island and Kong itself all provide a basis from which to analyse the subtle, and not so subtle, changes in its ongoing misrepresentations.

The artefacts you discuss in Skull Island Part III (from King Kong and Paul Verhoeven’s Hollow Man) provide starting points to think through a huge range of ideas. What do these objects tell that words can’t?

I approached the practical effects and prop archive in Berlin as if it was a sequence of images – each object a symbol of the film it was used in. Both operate as a generative device – like a match cut in cinema – where the viewer has to fill in the blanks between one shot and its successor.

The voiceover acts as another layer in the framing of the images – it directs the viewer, guiding where and how to look at them. So the voiceover and images are developed in conjunction, equally able to guide the content. 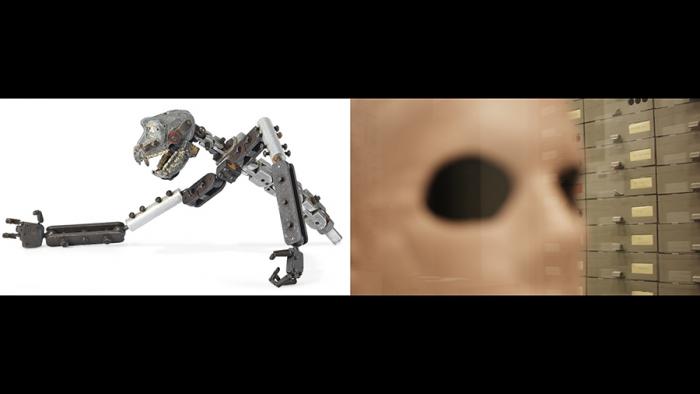 You manage to find these elusive stories behind seemingly innocuous images and films, hiding in plain sight. How do these pass us by, as viewers?

I’m always looking for points where what I think of as ‘image space’ bleeds into the physical environment. This is often from learning about new forms of image technology (hardware and software) or new methods of experiencing and capturing images with existing tools. By considering moving images as components of wider social and political systems, you open up possibilities to categorise them by not just what they show but also by how they can work.

I find it very interesting that moving images still have the power to suspend disbelief, even though most members of contemporary audiences have grown up with them in one form or another. There is a tendency to not want to destroy the magic of cinema by looking behind the curtain. For me, it’s even more fascinating to consider our presence within the medium – and its presence within us.

Is that why you so often choose images and objects from popular culture, blockbusters and franchise cinema?

I favour using more widely known references in this series, as they provide a collective material to be broken apart. Popular culture acts as a form of shared language, in that there is a universal learned behaviour of experiencing it.

This latest instalment in the series is perhaps the most personal so far. Seeing Terminator 2 for the first time was a hugely influential moment for me when I was younger, so making Skull Island Part III was as much an exercise in trying to analyse some of the origins of my own perceptions of white masculinity as it was in deconstructing the films themselves.

One of the things I find most interesting about mainstream Western cinema is that because it’s so strictly formulated, and has been for such a long time, it’s difficult to gauge its levels of authorship. Who or what is leading the construction of a  film – its makers, or the rigid systems of production and presentation surrounding it?