It’s already almost a year since the first lockdowns hit Europe, when Plokta was among the first of countless cancelled or postponed cultural events – and before Zoom fatigue set in on a global scale. PloktaTV quickly emerged from the ashes: a makeshift TV station, calling back to past eras of classic television by broadcasting worldwide on a synchronous loop.

What makes Plokta unusual compared to other film festivals in and beyond Amsterdam?

Plokta is a thematic film festival, with films about the relationship between people and technologies. In a way, that makes Plokta a very specific type of festival, in Amsterdam but also worldwide. On the other hand, this thematic focus opens up avenues to have tons of different kinds of films: more classic cinema and feature film, but also online video, or consumer-made films shot on phones. You have a lot of genres – fiction, non-fiction and documentary, video art. So the idea came from making a platform for different viewers: the usual suspects, as well more newly interested people or casual viewers. Plokta builds something in the middle. In Amsterdam, a tech hub, much debate around technology happens in isolated artistic and academic realms. But we wanted to open that up to a wider audience – to change the conversation.

Where did the initial idea for Plokta festival come from?

The original idea was to use film as a common denominator in thinking about technology and society. And it had to be film for a couple of reasons.

One is that it feels like a more open medium. The technology debate is deeply based in text – that’s the main tool for analysis, especially in academia. But film has a different way of looking, and appeals to a different audience. The real underbelly of what people think and feel about technology is more based on the films they know: Robocop,Terminator, and Her have really set the agenda for thinking about the future of technology, even while being popcorn movies that a lot of people know and like!

Another reason is that film is a nice linking pin between all the different creative kinds of reflecting on the topic: there’s video artists, designers – but also more academic types, who use film as a lens to think about technology, even if not using film itself as a medium to express that. Film can get close to technologies, show what the bare eyes can’t see and spark debate. 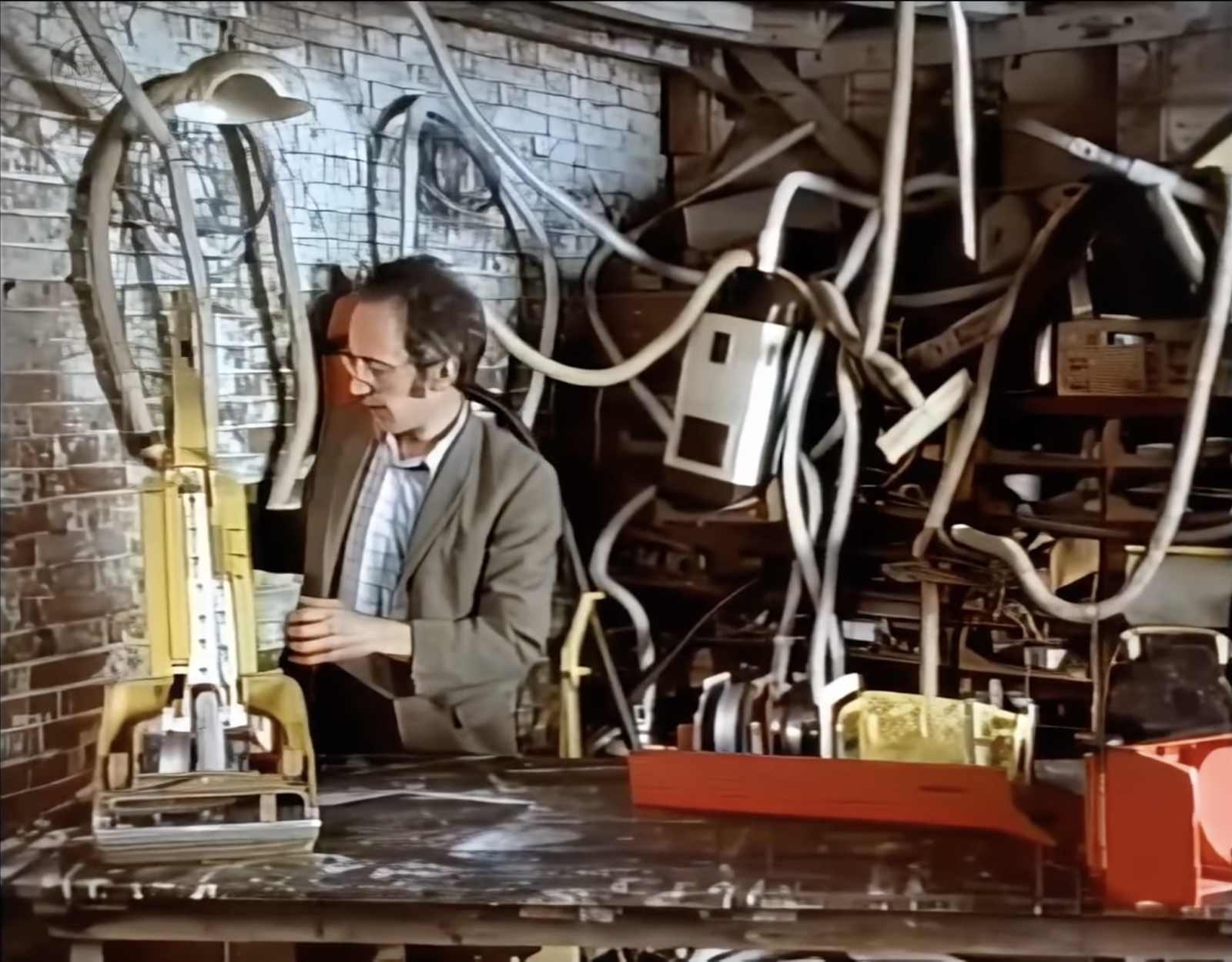 The Secret Life of the Vacuum Cleaner

So how did the theme come about? What is it about ‘the Hidden Life of Technology’ that appeals to you?

The title is adapted from a BBC show called The Secret Life of Machines from the ‘80s, with a presenter called Tim Hunkin. He disassembles everyday objects like vacuum cleaners and washing machines, but also mixes this with weird little cartoons and artistic projects. I really liked this hybridity, and since seeing one show about vacuum cleaners, my eyes became stuck to them. Now I can’t stop looking at vacuum cleaners in a very different way. The effect was so spectacular that this appliance was somehow readapted in my mind. It’s such an everyday object, yet somehow it now had this kind of animistic quality.

I had a similar feeling about one of the staple films for Plokta, Wavy Tales by Sunjoo Lee. There, she looks at microwaves, and people trying to explain how they work. Nobody has a proper technical answer, but still they speculate. I was hooked by this everydayness, this fact that we don’t understand things we touch and use every day – despite all the debate around even complexer technologies: algorithms, computers, social media. Things we can’t unpack, even though we need to relate to them. Your vacuum is an isolated box, but your phone is connected to all these different forces in society. The complexity becomes exponentially bigger once you factor in all the economic incentives, the political effects...

So I like to come back to the hidden life of things we do know, and use this as a base, as a reference point for thinking about technology more widely – a debate going all the way back to Aristotle.

This kind of mystery and unusual personality for Plokta also comes through in the design. What inspired Plokta’s look and its logo?

I was already hooked by the unusual aesthetic of designer Jiri Mocek – it was quite mysterious somehow. And he seemed to get the idea for Plokta instantly, even though the briefing wasn’t super specific: to find something untimely – not of now, nor straightforwardly from the past. So there are historical references in the typography and overall design, but it’s something that can only be made looking back: a pastiche of different things. For example, the letter ’T’ has echoes of Atari. The letter ‘P’ is from a more trance aesthetic, like ‘90s rave flyers. It’s a collage of different logo types – technology brands, game brands. It calls back to ‘80s technology corporations that came across as very paternalistic, masculine and all-knowing. Technology can often have this vibe to it, and debate about technology as well – it feels like a long list of warnings for everything you do. And people often feel this: they shouldn’t allow cookies, they should be wary of Facebook. That’s a feeling we all have when using technology. So the identity of Plokta plays with it.

This was originally a makeshift solution when the physical festival had to be cancelled in April 2020. A lot of energy had been built up around the festival, so we were able to rechannel that to PloktaTV. But the ‘TV channel-ness’ of PloktaTV also somehow fits the festival really well! It opens up Plokta’s horizon from cinema to online video. And it makes space for shorts and new kinds of video; the program is easy to cram with different stuff.

It was also a way of opening up to different types of makers: emerging artists, art academy creatives, academics with a more amateur approach to film craft, but with interesting ideas. So it was a great way of compressing a lot of ideas, visions and perspectives – and different ways of making films – into one program.

For the viewer, it’s also a nice way of watching film online. It frees you from all the decisions you’re forced to make every day on the internet. Instead, you just sit in your chair and get fed the ideas. It takes back the (false) control you’re used to in a lot of internet viewing platforms, with no possibility to skip or choose. It’s more similar to a cinema experience, in that you just tune in and get what is being served. You don’t make decisions, so you have more space in your head to take in what you’re watching.

PloktaTV also calls back to particular eras of television’s evolution. What inspired the first season?

That’s down to the early stages of the pandemic itself – these paternalistic messages: wash your hands, keep distance, stay safe. This having to stay home, these obligations, it all had this cold war ‘50s ring to it. So the ‘television-ness’ really fit that first season well – the golden age of television, which was much more paternalistic.

So how is the focus different for SE/02?

In the new season, we’re still working with the hidden life of technology. The theme is still untimely, but here we’re playing a little more with or against on-demand, streaming and algorithmic curation in today’s online TV. There’s this fatigue of making millions of decisions each day. So we’re pushing back against those pressures; you don’t get to choose – you see what is there. And now we’ve had much more time to develop our program, rather than throwing it together last minute. But in a way it’s still kind of the same as in the ‘50s. It’s still good old television.