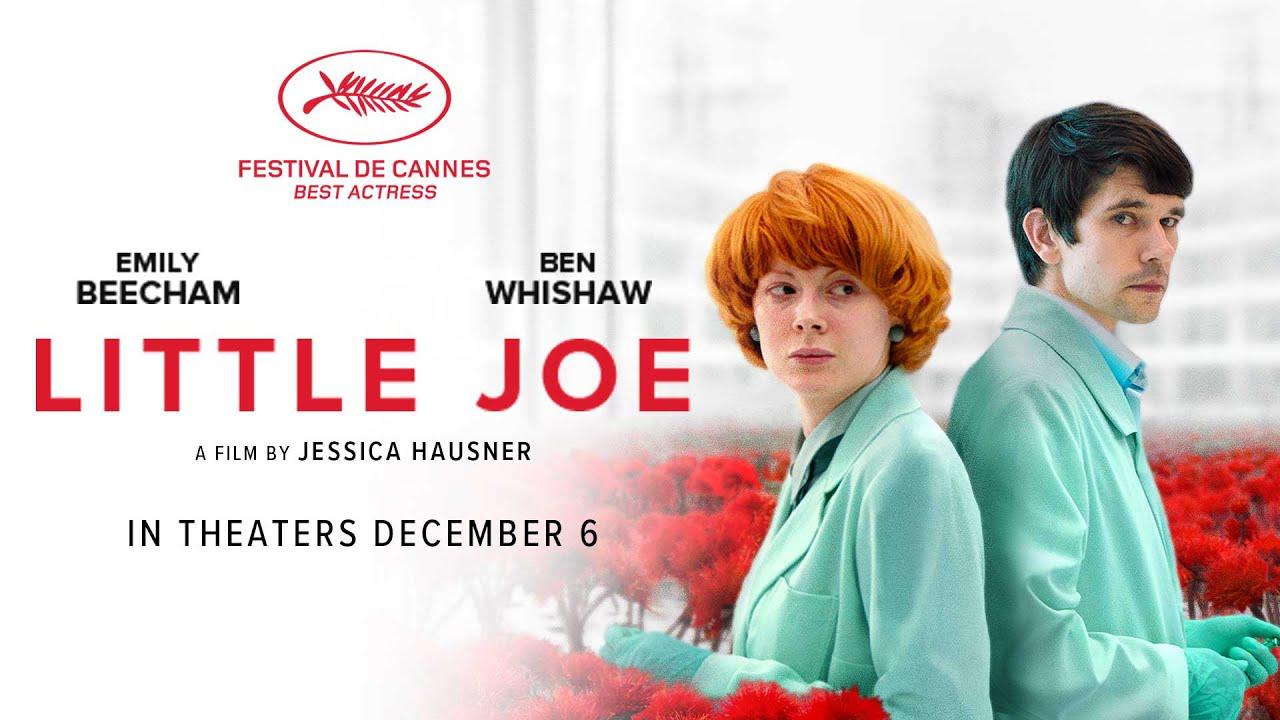 What would happen if a plant could be genetically modified so that it could make people happy? Would it overthrow the antidepressant industry? Who would make the plant, and how would it work? Jessica Hausner’s new film Little Joe asks and answers some of these questions.

When plant breeder Alice Woodard is pushed a bit too hard to have her happy plant Little Joe ready in time for mass distribution, a series of odd events makes her aware of the possible unwanted effects the plant might have. ‘Little Joe changes the people he infects,’ the voice-over of the trailer says in a sinister tone.

What stands out immediately is the film’s Wes Anderson twist on minimalist futurist aesthetics. Alice is either dressed in a soft green unwrinkled lab coat or a pastel pink seamless jacket. The lab is transparent but not necessarily bright, dressed in soft tones and red lights. Although the plants grow in a greenhouse, the rest of the lab is seemingly without edges or corners. And the plant itself? Its deep red enhances the otherwise soft color palette perfectly. It gives just the spark of liveliness the film needs to seem real enough, but not quite too real.

The aesthetic depiction of the Future™ has changed throughout the history of film. The 80s had neon, the 90s had concrete. As one writer points out, even multicultural street life once was part of the aesthetic palette of futurism. Although these choices might look like they are made independently of the plot, aesthetics are driving factors of the feeling a movie conveys. In the case of Sci-Fi, they reveal dominant attitudes about the future. Neon could express exciting and curious attitudes towards the future. Concrete’s timeless and placeless qualities could express a sense of a new beginning, while its harshness and greyness also convey a more grim and skeptical feeling.

Bright, light, seamless, and curved shapes like the buildings and clothing in Little Joe generally portray an optimistic view of the future. It is the look of human control over the mess and instability of nature. Little Joe feels like it’s filmed in the Apple version of a greenhouse. Just like the Apple store, it is calm because there is order. The two are linked, they almost become interchangeable. The problem of a design that becomes interchangeable with a feeling is that it tends to be a way to trick you. In the case of Apple, the point of the trick is obvious: you have to be persuaded to buy their new expensive products.

This begs the question what persuasion Little Joe is doing. It certainly isn’t portraying a naive or optimistic narrative about true human happiness through modified plants. The whole plot is actually set up to question this, making perhaps the most classic of all Sci-Fi questions central to the film: is this new technology serving us or are we serving Little Joe? In this case the combination of soft aesthetics and a sinister plot enable the “hypnotizingly eerie” qualities the movie is praised for. The plot makes the initial calm and soft hues and forms suspicious, thus enabling a critical view of the possibilities of technical solutions to human problems around things like happiness, reproduction, labor, motherhood and mental health. The conversation between the aesthetics and the plot of Little Joe both reveals and conceals aspects of these questions, making it a good starting point for further conversations.

Emma van Meyeren is a writer and DJ based in Amsterdam. Her writing has appeared on Vice.com, Glamcult and De Groene Amsterdammer.