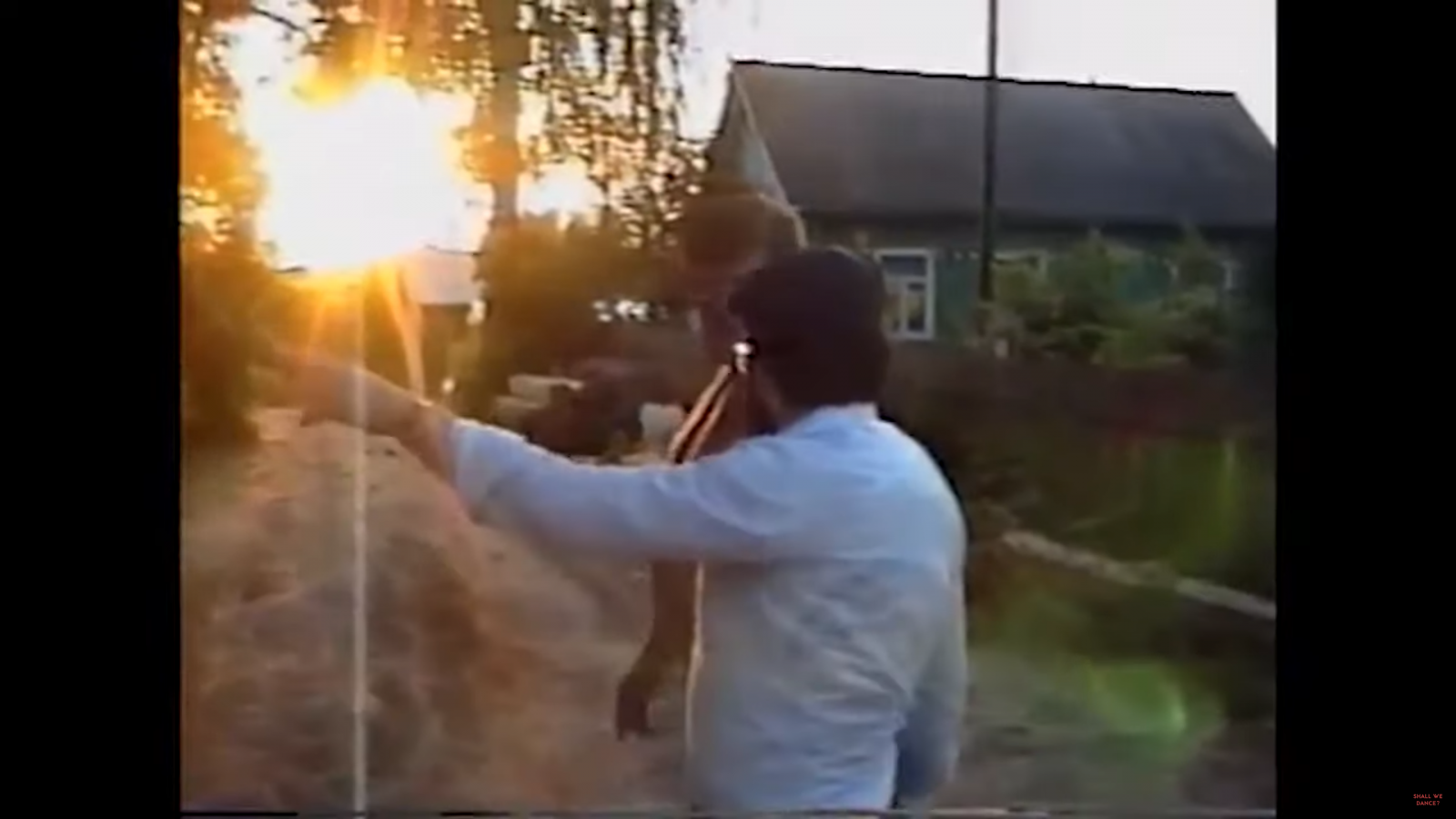 A pale blue sky is bisected by a windscreen wiper. The camera is shaky; it jerks to the right, then to the left. The driver stares ahead stoically, ignoring the camera. On the back seat a friendly bearded face smiles, showing his teeth. The image flickers and jitters with colourful glitches. For a few seconds. Then the blue sky returns. And the windscreen wipers. The camera zooms in on the dirt and cracks in the windscreen.

We are watching a road trip, filmed in 1991. Somewhere towards the end of the four-minute video we see the film-maker. Like the others he has a bushy beard and wears formal clothing, including a broad-brimmed black hat. A member of an orthodox religion, perhaps? Is the building in the video’s last shots the final destination of the trip? A makeshift house of worship, lost between the wide fields and woods of the countryside in – yes, where? Russia?

These are questions you ask yourself only if you start thinking about what you’ve just seen. Most of the time I never ask myself this about EELF videos.

EELF’s YouTube channel combines 1990s amateur video with recently released music. The music has the leading role. In early 2017, the Lithuanian Andrius started uploading his favourites: just-discovered electronic dance music that harked back to the earliest days of the genre. He found suitable still images to go with the music. It was a success; his followers grew to a few hundred. In mid-2017 Andrius switched to video. First he combined lo-fi house with film scenes. It was fun, but something was missing. The combination had to be something other than just a gimmick. Sound and image had to support one another, had to lead to something unique. It all came together when he started using found VHS material from YouTube. New lo-fi house with amateur video clips from the 1990s were a perfect fit.

Today EELF has a catalogue of about 800 of these combinations, the channel has more than 100,000 subscribers, and Andrius spends two hours a day making new uploads.

Finding the perfect combination is a delicate operation. Late Nite by the Toronto DJ GiveUp, released on 3 February, is the soundtrack for this road trip. No, wait: the images of the trip form a visual frame for the fragile, melancholic house music. Andrius’s tagline is ‘EELF is creating nostalgia’, but that’s not how I see his work. Yes, the music he curates flirts conspicuously with a musically more interesting past, and the videos he selects are also of another age. But when the two are superimposed something new arises, something I would rather describe as an alternative reality. There are elements that make us think of the past. The naïve, simple drum patterns of Late Nite, for instance. The old women on the roadside waving exuberantly at the camera. The clumsy zooming in and out, and the jerky camerawork. Together these images call up emotions we might call ‘post-nostalgic’: they make us aware that we can approach things today in a more open, conscious and naïve way without losing ourselves in the past or the future.

EELF is showing us a new pop culture that doesn’t fight the status quo but creates a different world. YouTube is full of channels like this, and they all deserve my attention, but for the time being my hands are full with EELF: I’ve still got several hundred music videos to go.

Theo Ploeg is a design and media sociologist. He tells stories about possible futures and is co-founder of Speculative Futures Amsterdam.