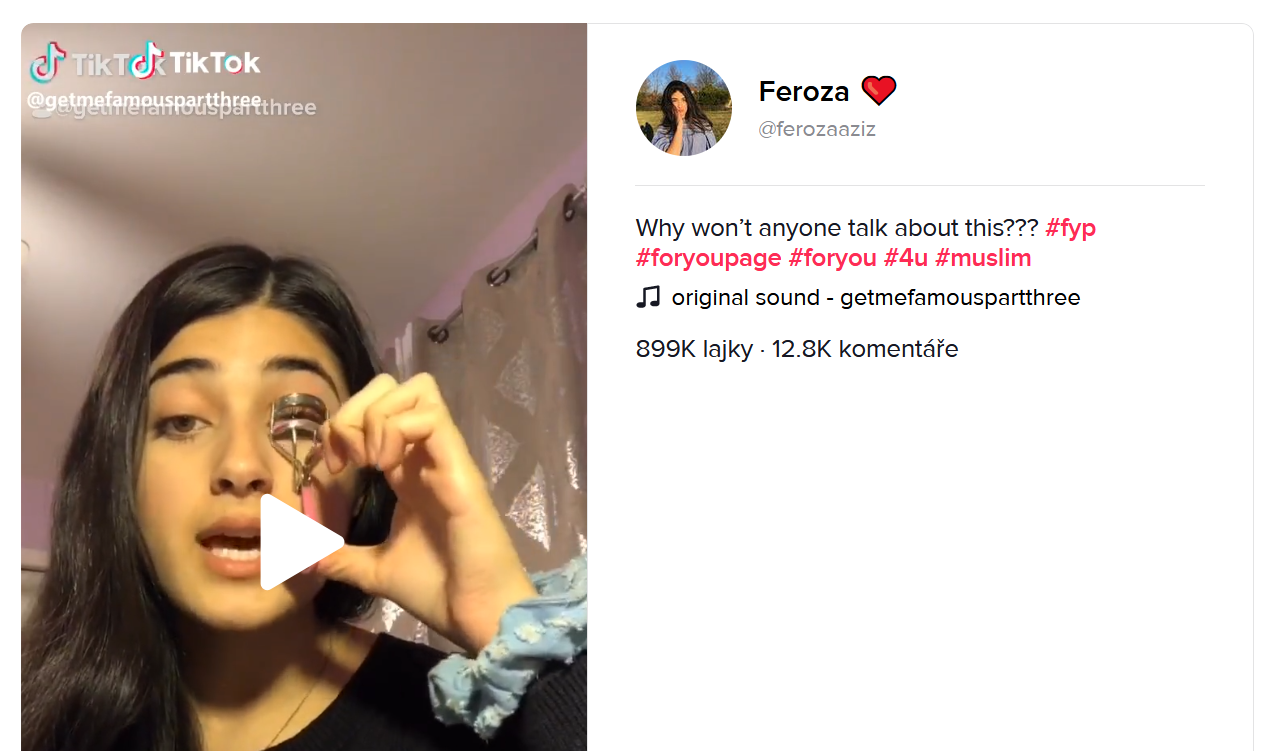 On the face of it TikTok looks like a platform for meaningless content: silly dances, stupid tricks and bored teenagers. But behind this superficiality there’s all sorts of stuff going on. For instance, you get a peek into thousands of bedrooms all over the world, and it is one of the few places where you get to see content from outside your own filter bubble. And there are TikToks that do, in fact, raise important issues. My own favourite is a video by the Afghan-American teen Feroza Aziz from New Jersey, a video which went viral at the end of November 2019. Aziz used the popular online video genre of ‘beauty tutorial’ not to explain how to make smokey eyes or perfect curls, but as a cover for a serious message. While confidently curling her eyelashes she asks her viewers to give some thought to the Uighurs in China, a discriminated Muslim minority. Over a million Uighurs are detained in ‘re-education camps’ whose existence has long been denied by the Chinese government.

This beauty tutorial demonstrates why TikTok is both a worrying and a fascinating phenomenon. The popular video platform quickly became a serious player in the social media landscape, and is currently the largest platform not belonging to Facebook. A significant difference from Facebook, Instagram or Snapchat is that TikTok comes from China. For years we have given our data to companies with American owners: men with dollar signs in their eyes, sure, but who at least come from a culture with more or less the same norms and values. We could, and still can, call them to account from time to time. But how does that work if we give our filmed lives to China? China treats ideas like freedom and privacy very differently. Their social credit system and internet censorship of Western websites are clear examples of this. Against this Chinese background TikTok struggles openly with its new position as a global platform. TikTok blocked Aziz’ video soon after she had posted it, then denied it, and later gave a grudging apology, for fear of losing the sympathy of Western users.

Blocking her original post, incidentally, had little point. Funnily enough this is because of how TikTok itself is built. The app was designed around the meme principle. Every video has music, and this sound fragment challenges TikTokkers to do a dance, a trick, or a performance. Other TikTokkers then make their own version. For instance, the opening line “Walk a mile in these Louboutins” from Iggy Azelia’s number Walk has given rise to a hype in which users tie bizarre objects to their feet, from candlesticks to oven gloves, and try to walk with them. These short videos are not just shown to friends, but can be seen by every TikTokker, and this means that such ‘challenges’ can go viral incredibly quickly. This is exactly what happened to Aziz’ video. On YouTube her video would have stood alone. As soon as content moderators realized that they’d let her video slip through the net, it would have been taken down. But on TikTok a video is like the first falling domino. After Aziz came dozens of other TikTokkers who used supposed beauty tutorials to call attention to Uighurs. Because the challenge spreads like a virus, is it hard for content moderators to eradicate them completely. We know that on online platforms, where much of our social life now takes place, we are constantly being watched by the Big Tech companies behind the platforms. The TikTok mechanism is interesting because it offers its users a way to push back. Power to the people!

Lilian Stolk is director of The Hmm, a platform for internet cultures, and emoji expert. She cares about understanding the internet and has a special focus on internet languages and the rise of image-based communication. She published Het zonderwoorden-boek (2018) about her research on emoji and launched the app Emoji Voter (2019) to democratize emoji. She is also a public speaker, writer and events programmer.