Revolving around the theme ‘The Hidden Life of Technology’, the program of Plokta SE/02 gathers the work of 51 artists* to uncover the inner workings of our entanglements with technologies. Fiction, science fiction, documentary, computer code and video art – it’s all streaming free, live and direct, from Monday 22 20:00 CET to midnight on Sunday 28. Tune into the stream as and when you like. Looping synchronously, our entire program plays back to back unscheduled.

Be sure to tune in each day at 20:00 CET though, for some proper 'primetime' television, with leading artists, talks, and film programs. Read all about it below. 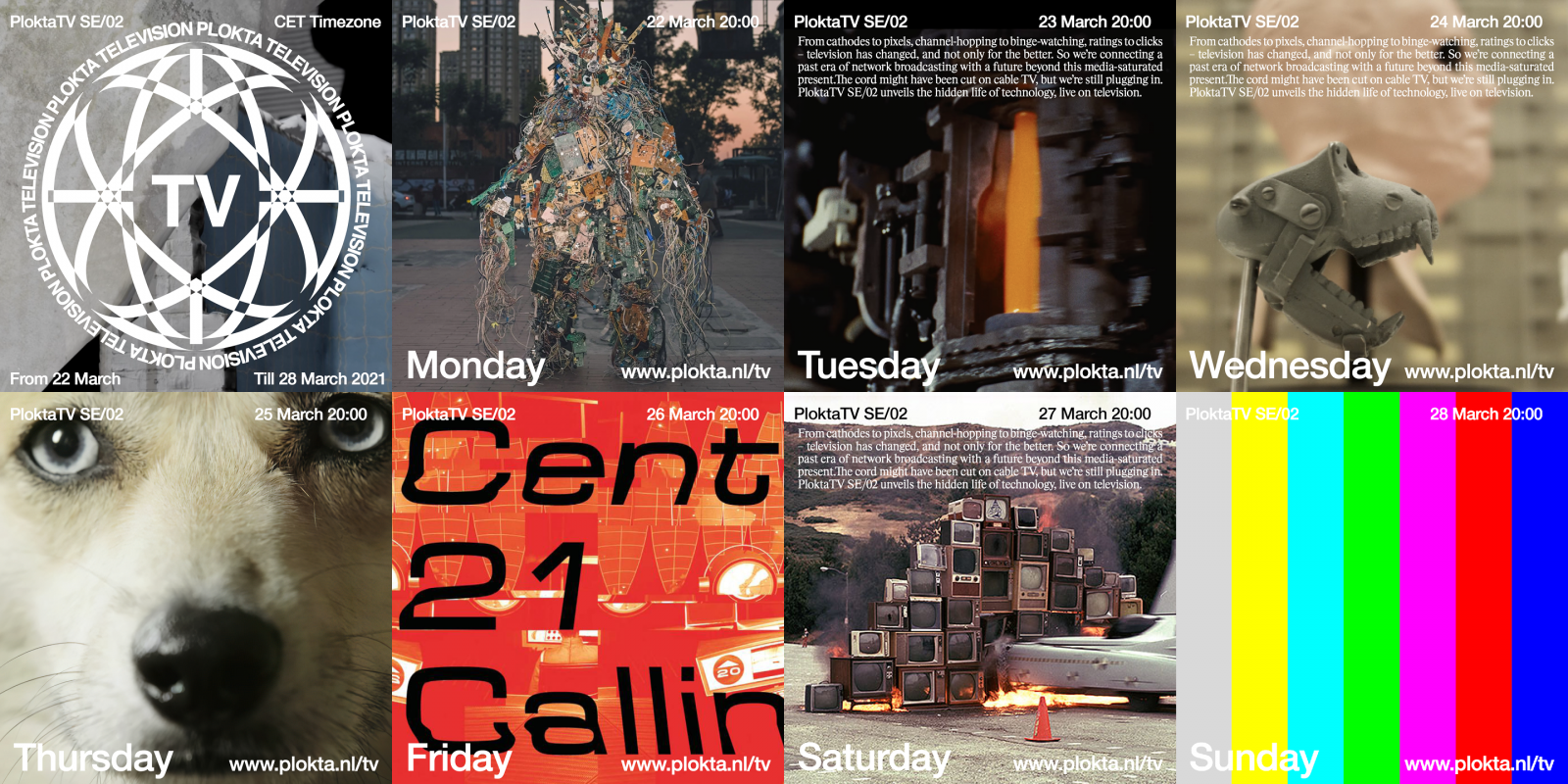 First up on launch night is the film series originally planned to kick off Plokta festival last year.

A “core dump” is the recording of a computer’s previous state – an oddly poetic “memory” of a computer that forms the basis of this four-part video series.

Francois Knoetze’s Kinshasa (2018, 13 min), Shenzhen (2019, 12 min), New York (2019, 13 min) and Dakar (2018, 12 min) interweave found footage, performance documentation and recorded interviews. Together, they extend the metaphor of a dump or crash to the impending breakdown and unsustainability of the global capitalist techno-scientific system – forming narrative portraits of a global machine on the brink of collapse.   In these stories of interconnections across time and space, you’ll discover the nervous system of the digital Earth.

Half a century before YouTube would introduce a glut of ‘how to’ and infotainment content, Bert Haanstra’s Oscar-winning Glas (1958, 11 min) wowed audiences with its hypnotic scenes of glassblowing.

The first Dutch film ever to win an Academy Award, this short paints an intimate, humorous portrait of craftsmen and their tools. Watch men and machines alike breathe life into glowing orbs of molten glass, all cut rhythmically to Pim Jacobs’ jazz score – sax blasts matched to glassmakers blowing down pipes, piano runs tracing the dextrous rolling of artesans’ fingers. It’s an indelible image of the warm heart of manufacturing.

In this ongoing video essay series, Graham Kelly zooms in on an iconic film: King Kong. ‘Skull Island’ is the fictional island upon which a camera crew discovers and captures the enormous gorilla – a complex monster conceptually loaded over the years with troubling allusions to race, gender and colonisation.

Skull Island Part III (2020, 35 min) takes as its starting point a model of the original ape’s skull, alongside a plastic mask of Kevin Bacon’s character from Paul Verhoeven’s Hollow Man (2000). These cinematic artefacts show opposite ends of a visual spectrum in a broader history of moving images – images that he shows are saturated with the politics around them. Connecting the dots from Terminator 2 to Harvey Weinstein, this essay provides an uncanny lens on police brutality, online voyeurism and artificial intelligence: a chilling glimpse behind the screen.

Read our interview with Graham here.

This special program, curated by filmmaker Philip Ullman, reaches beyond the limits of the human – to other species, and other worlds unpeopled but not unpopulated. A housefly, eternally pursued by a disembodied hand. A dog, gazing through an airplane window at an abandoned futurescape. Mushrooms, singing the virtues of their mycorrhizal networks in hyper-pop chorus. The mythological, animal origins of tools. Shadows of an eclipse, vectors bisecting creature and person alike.  These six films trace the lines where humans and non-humans meet – or do not. Zero (2019, 6 min) by Luiz Roque, The Housefly (2020, 20 min) by Alexander Pannier, Mushrooms (Sisters of the Wind) (2021, 3 min) by Juliette Lizotte, Fluid Motion (2021, 7 min) by Liminal Vision (Victor Evink & Emilia Tapprest), Eclipse (2021, 10 min) by Niklas Büscher, and Betweenness (2018, 5 min) by Oliver Laric.

Technology, far from humane, is fading in the reflection of these non-humans. The answers might not be in the language we speak amongst each other, but if we listen carefully, maybe they will tell.

Century 21 Calling is a series of screenings initiated by Thomas Walskaar, usually hosted at Varia in Rotterdam.

On Friday night we will be looking back at movies from the ‘60s and ‘90s that have influenced today's world of computer graphics, user interfaces, audio technology and computer networks. From synthesising speech and 3D-animated movies to the future office, video calls and futuristic corporate presentations. The program features Behind the Lens: A Camera Goes to College (1940, 8 min) by the Handy Jam Organization, The Incredible Machine (1968, 15 min) by Paul Cohen, and Starfire: The Director’s Cut (1994, 16 min) from Sun Microsystems.

Together, they provide a glimpse into the archival industrial films, corporate infomercials, TV reports and historical documentaries of yesterday that shaped the imagination of tomorrow – and hold it up to the light of the present.

On Saturday, LIMA and PloktaTV join forces to unravel the relationship between people and technologies, by diving deep into the notion of television.

Selected works from the LIMA collection each shed light on the place in society of this illuminated picture tube. Featuring I/EYE (1993) by Bill Spinhoven, TV as a Fireplace (1968-69, 24 min) by Jan Dibbets, Démontable (2014, 12 min) by Douwe Dijkstra, Media Burn (1975, 26 min) by Ant Farm, and Video Hacking (1999, 4 min) by Manuel Saiz.
Together they present the television as the ritualistic cornerstone of modern society, but also as an object to fight, destroy or hack. In an introduction unpicking these complexities, LIMA’s curator Sanneke Huisman will engage in conversation with Plokta-initiator Jurian Strik and Chip Lord, one of the creators behind Media Burn.

Tune in to find out more about how we are watching television – and how television is watching us.

After a week characterised by primetime features and automated programming, we throw down the grid – bisecting and taxonomising those golden minutes. For the final hours of PloktaTV, organiser Jurian Strik cherry picks favourites from across the program. Catch up on what you missed, relive the reruns and let this highlights reel wash over you in technicolour.

* Thanks to all the artists: